skipping comes back to scoil Chaitríona 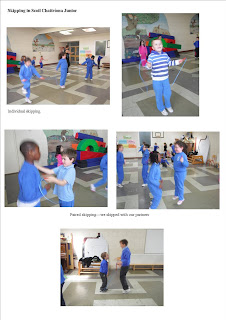 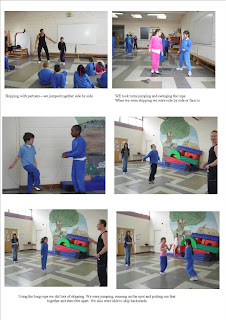 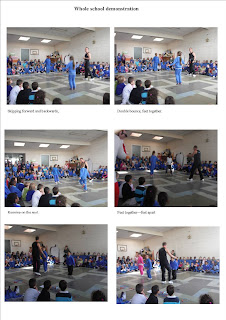 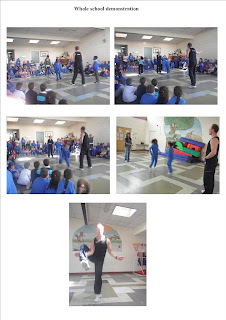 Email ThisBlogThis!Share to TwitterShare to FacebookShare to Pinterest
Posted by Unknown at 6:00 AM 0 comments

Skip hop came to our school. We learned lots of new tricks including double dutch, backwards, crossing arms, jumping, skipping with partners, using the long rope and many more. We had a fantastic time! 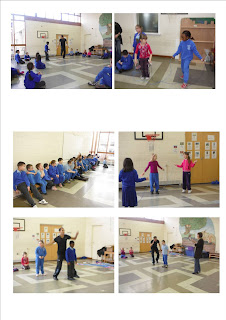 Our Healthy Living project, very kindly sponsored by Medtronic Foundation
Week 1, Planting our school garden under the advice and help of Kay Synott, April 13th, 2010.Week 2, More planting and watering with Kay. Some of our seeds are coming up. Fantastic presentation from Brendan Smith all about healthy living.
Week 3, Making a human Food PyramidWeek 3, Food Art
Week 4, Tasting fruits and vegetables
Week 4, Printing faces with fruits and vegetablesWeek 5, Gardening and watching our plants grow
Week 6, Gardening
Week 6, Creatures in our class

Videos: Planting our school garden
Thanks to Medtronic Foundation for their generous sponsorship of this project!
Week One, April 13th, 2010

Scoil Chaitríona Junior are thrilled to be included in this year's Medtronic Healthy Living project. Thanks to the Medtronic Foundation in Galway, we are being funded, advised on and helped with the building and planting of our own school garden. The work began in earnest today with our first planting session.

Kay Synott has come to be our advisor. She had a meeting with Brendan Smith (who will help us learn about foods that are good for us, and how to keep ourselves and our hearts healthy) and our teacher. They have chosen a good spot for our garden - in the front of the school, in a lovely sunny spot.

When Kay arrived today she had a chat with our class and Mrs. Newell's class about which fruits and vegetables we should plant and why? We decided not to plant bananas or oranges since they don't grow well in Ireland! We can't plant crisps or chips but if we plant potatoes we hope we can make our own crisps and/or chips.

We helped Kay prepare the raised boxes. We did the smoothing of the compost, making seed drills, planting the seeds, writing the labels, fetching water from the water butt, and watering the seeds. All the while we talked about what seeds need to grow (air, warmth and water), what is counted as a weed (any plant that is growing where it shouldn't be) and how to look after the seeds we planted. We know we should eat 5 portions of fruit and vegetables a day. We can't wait to try tasting the ones we planted.

Today we planted potatoes, sunflowers, onions, scallions, carrots and nasturtiums. Next Tuesday we will plant strawberries, spinach and peas. We just love gardening. Thanks Kay and Medtronic!! 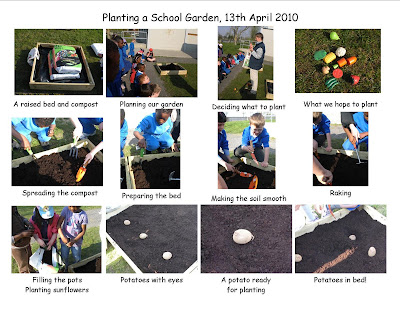 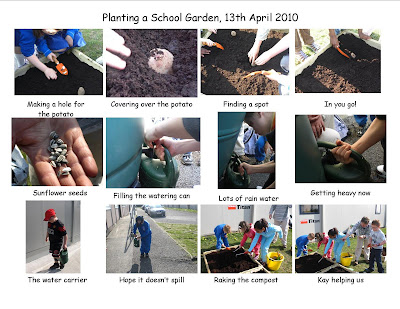 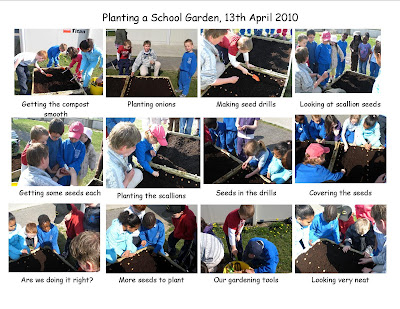 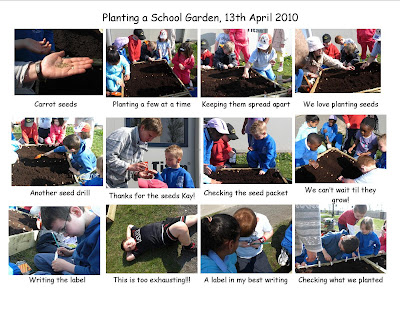 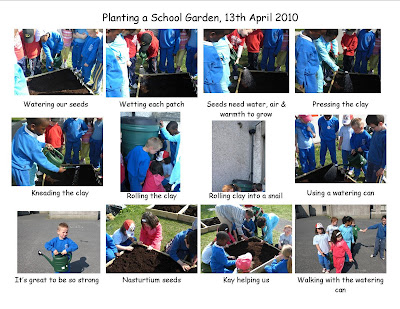